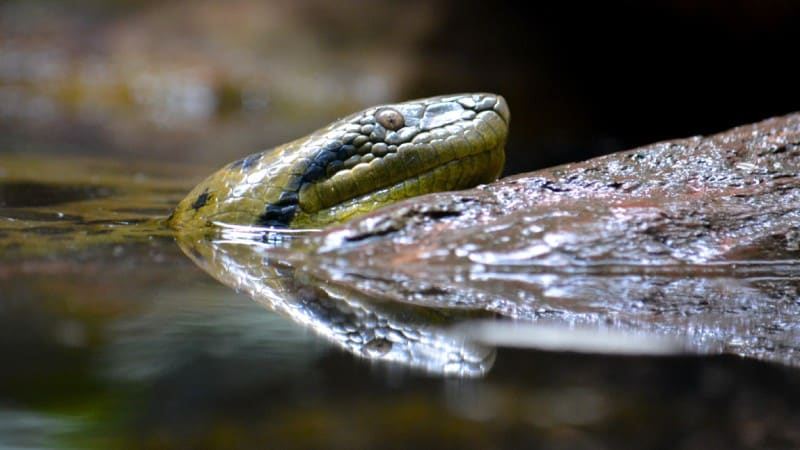 The Green Anaconda attains a length of as much as 22 ft (6.6 m). This species also exhibits a slight degree of sexual dimorphism.

The females average about 16 ft (5 m) in length, and the males, being rather smaller, average roughly 9.8 ft (3 m) in length. Weights also vary rather greatly, depending on how recently the animal has fed. Generally, adults average between 66-154 lb (30-70 kg) in weight.

The coloring of the Green Anaconda also typically consists of an olive green background. This also has an overlay of dark blotches along the entire length of the body. In comparison with the body, the head stays rather narrow, and the eyes position themselves high on the head. The Green Anaconda lives as a primarily nocturnal animal. It also commonly spends the vast majority of its life in or around water.

In the water, it becomes capable of moving rapidly and attacks its prey with stealth. The Green Anaconda usually constricts around its prey until it suffocates.

This animal feeds upon virtually any prey it can catch, even very large creatures. Individuals also generally behave rather aggressively by nature.

It also lives a solitary life, except during mating season. The mating season typically runs from April to May.

As an ovoviviparous creature, the Green Anaconda typically gives birth to 20-40 live young. However, as many as 100 offspring are occasionally produced.