For comparison, here is a Green Bush Viper – Check out the lack of spiny scales on the head. Image Source Photographer: Sipa

In addition to a small size, the Spiny Bush Viper also displays a comparatively moderate degree of the characteristic of sexual dimorphism. Males attain an average length of approximately 29 in (73 cm), while females only average 23 in (58 cm).

The males of this species, meanwhile, also have a much more slender shape than the females. Additionally, the head of the males also has a short snout, much more so in males than females. The Spiny Bush Viper also has relatively large eyes.

In addition to its other unique traits, the coloring varies significantly between individuals. This nevertheless typically includes shades of blue, green, and brown. This often leads people to mistake individual snakes for members of differing species.

Yet the highly distinctive scales remain the most noteworthy, and recognizable, feature of this reptile. These distinctive features develop as heavily keeled in design. These also develop quite elongated, giving the species a shaggy or bristly appearance. 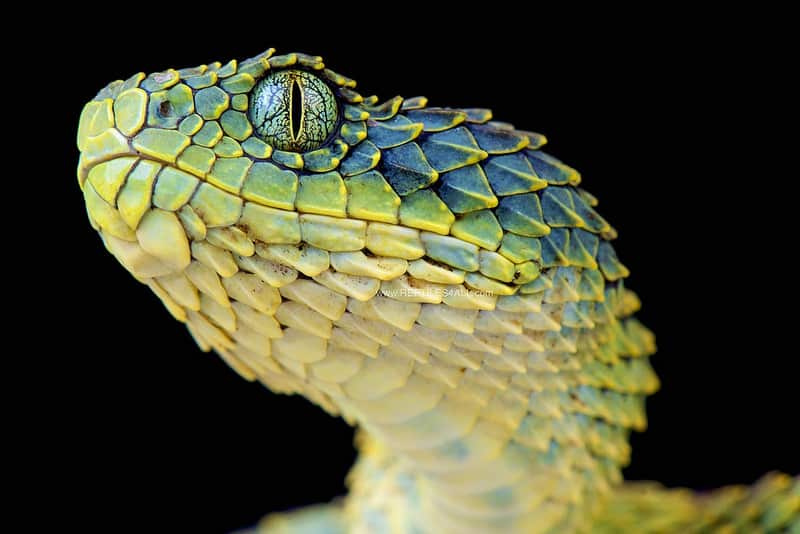 The deadly but beautiful Spiny Bush Viper remains endemic to specific portions of Central Africa. This includes portions of Uganda, Kenya, and Congo. The species typically inhabits regions of rainforest, since these contain large numbers of flowering bushes.

Most of these regions remain far from human habitation, making encounters rare. Further adding to this tendency is its natural pattern of behavior. These patterns remain primarily nocturnal, and its hunting and feeding habits reflect this.

This snake hunts as an ambush predator and likes to perch on reeds and small bushes. The Spiny Bush Viper also uses its prehensile tail to hang from tree limbs, waiting for prey. This mainly consists of birds, rodents, lizards, and frogs, most of which are active at night.

Females of this incredible snake generally give birth between the months of March and April. They also often have up to 12 young at a time. Scientists still know little about its venom, except that it appears to be neurotoxic, and far deadlier than once believed.

Quite interestingly, the toxicity of the venom seems to vary. As far as scientists can discover, this appears to happen in correspondence with many factors. These even include weather conditions and the altitude at which the individual snake lives.